Heroes @ the Hive 21.00 Reviewed by Jabe
11 August 2015
It is quite possible that a human being could not spend a more delightful hour of their life than in the company of The Herbert.  This is the return of the Clown.
In the bowels of cavernous, labyrinthine The Hive (venue 303) on Niddry Street a small miracle happens.  Spencer Jones has created a character of such idiocy, childishness and endearing enthusiasm that the audience is swept along in a tidal wave of laughter.
The Herbert is unable to function as a proper grown-up; he finds useless uses for everyday objects and acquires useless rarities with which he finds fascination, much to his wife’s frustration.
As he shows off his collection, there is barely a chance to catch your breath between laughs.  Endlessly intrigued by these things which he finds around him, he makes them come alive with an almost innocent excitement.
We then begin to meet his family all played exquisitely by Jones’ variation on half-masks.  Each one a full character.
The Herbert is a 38 (39?) year old man who has to get a job.  A proper job.  When he does, things only get worse but his optimism keeps him going, blindly convinced that everything will be alright.
No matter what is thrown at the Herbert, nothing keeps him down.  Even when his most expensive acquisitions fail him he shrugs it off as just another thing to have happened; nothing is either good or bad.
It may seem strange to read, but the sight of a man trying to play a musical instrument has surely never been funnier.
He creates so many images out of almost nothing – we are in an underground arch, he only has a few props and his body, and yet we see the whole world in which he exists with clarity.
That a character this absurd, this unreal, can seem so believable is all down to the technical skill, natural instinct and warm charm of Jones himself.  It takes a great deal of hard work to make a show look this easy.
There is work in here which is reminiscent of Hoipolloi at their best, also of Mr. Bean & Frank Spencer and even bits of Ken Dodd (I’ll let you decide which bits).  But these are unfair comparisons as he is his own, theatrical self, brilliantly wrought from both tradition and innovation.
The show remains a triumph throughout.
There are quite a lot of effects, goggle-eyes and very mild use of the audience in this inventive hour but I don’t want to give anything away so will just say that if you like your comedy in a pure and joyful state: this is for you.
Clowning at its best.
5 stars 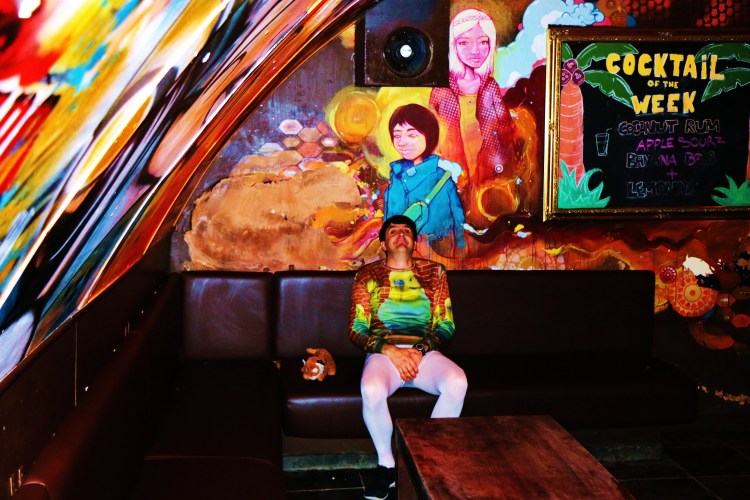